Disclaimer:
If done incorrectly, practicing guitar may cause injuries. It is one’s own responsibility to: See a physician, first and make sure that he/she is fit to play guitar. Always warm up and stretch before playing. Quit playing when he/she feels any muscular discomfort or pain.

If we froze the frame for a period of time in the amount of a particular note’s value, we can see and hear a combination that almost creates an extended chord. We can imagine the whole piece, song, etc. consists of one extension chord after another instead of seeing the melody and the background harmony as two separate entities. The Chord Charts below makes it clearer.

This is a piece in the key of C major. It was one of those tiny projects that I started with an idea in my head but ended up with a slightly different one.

First, I wrote down a chord progression. My original progression was a basic

With a few changes, I turned it into

If I write a complex melody, I keep the chords simple. On the other hand, if I write a simple melody then I play around with chords and experiment with alterations. But even then, I often follow kind of a linear approach. I try and keep the chord harmony move below the main melody and keep an eye on what each one of the notes is doing rather than insisting on a certain chord and voicing just because that happens to be what I had originally written. 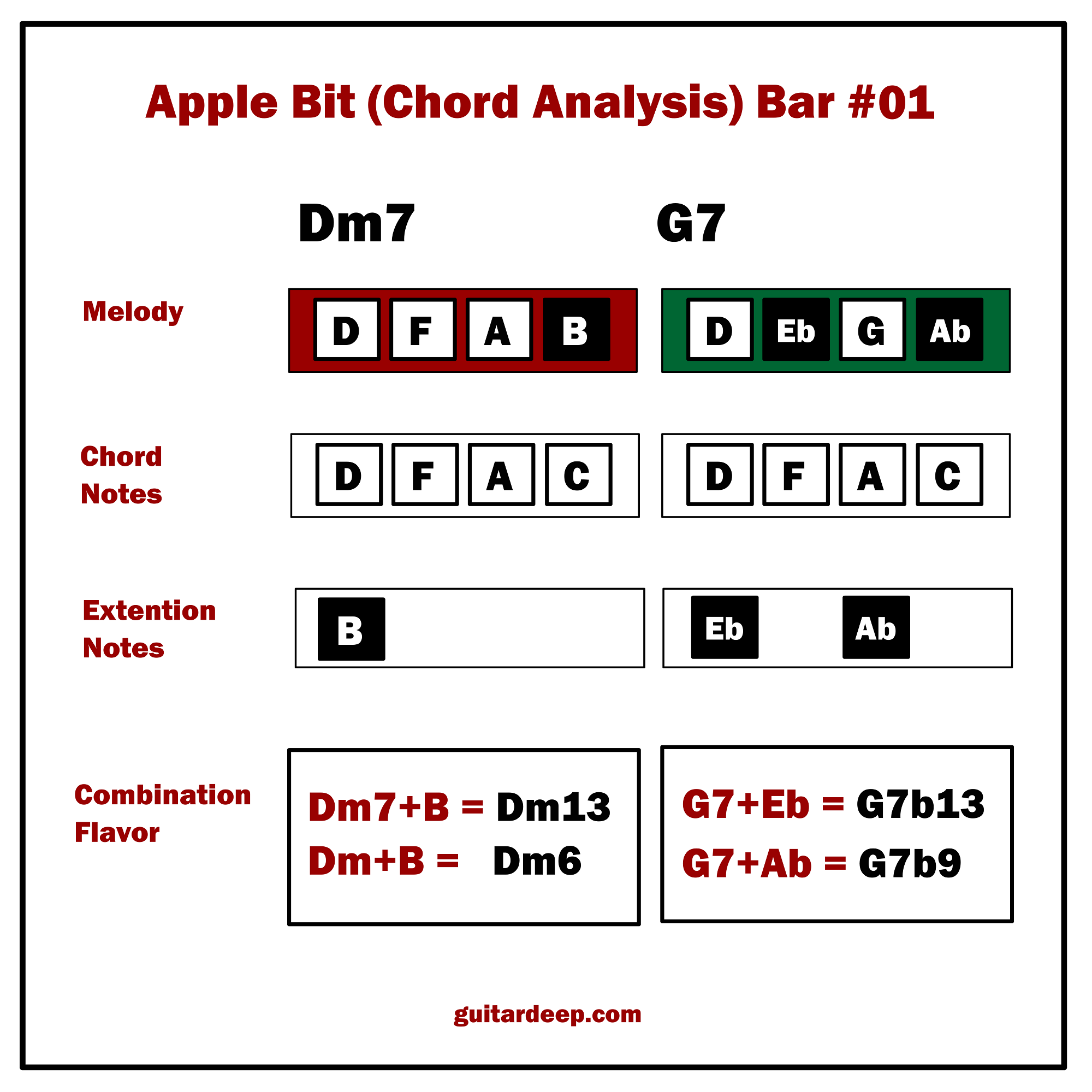 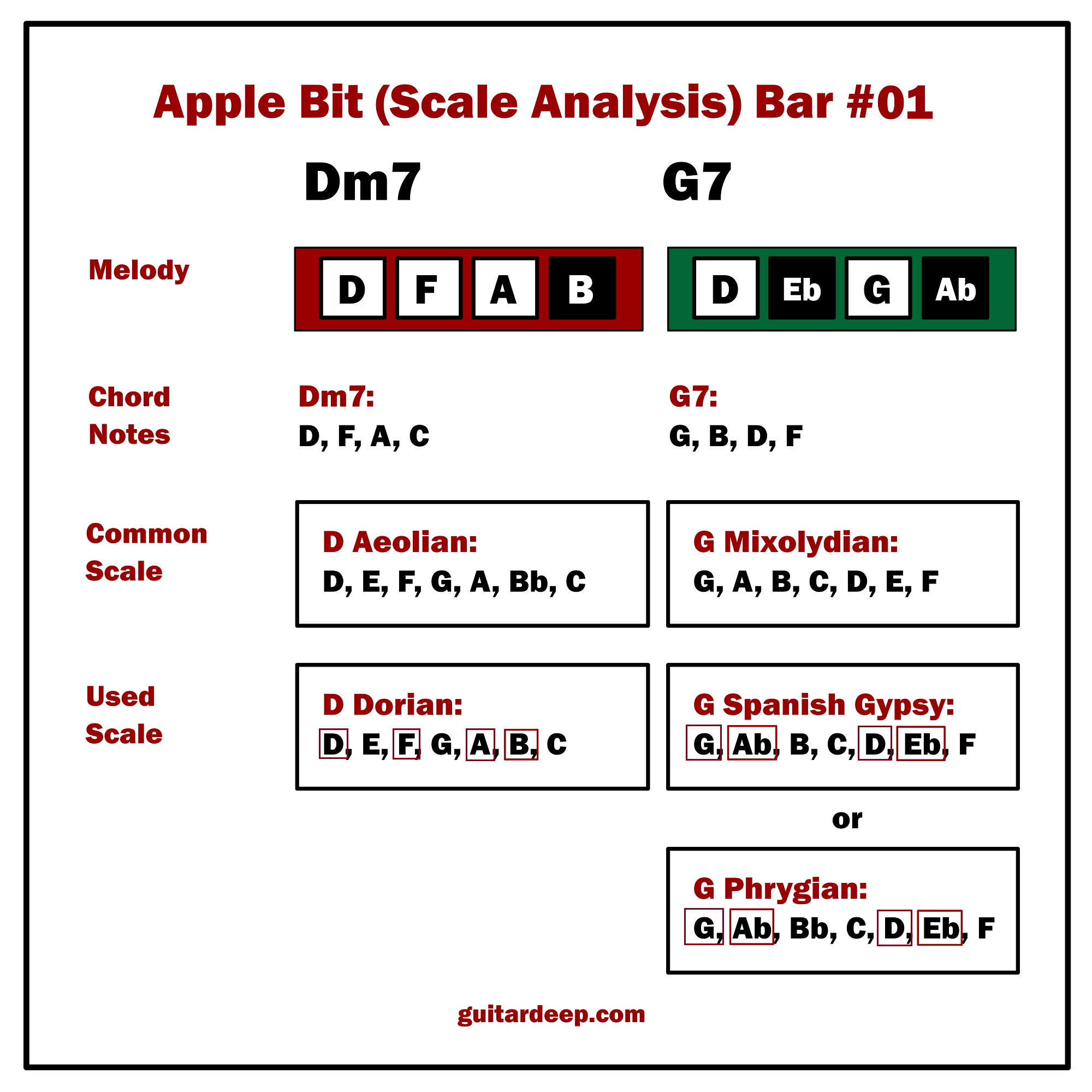 Over Dm7 chord I could’ve used D Aeolian Scale (D, E, F, G, A, Bb, C) but when a minor seven chord is in the position of
IIm7, Dorian always sounds more natural.

Then follows G7, the V7 (five dominant seven) chord in the key of C major. Just like I’ve chosen D Dorian for Dm7,
I could’ve used the expected Mixolydian for the V7 chord but this is a short example piece, so I wanted some flavor in there,
right off the bat.

I had Ab Melodic Minor Scale (Ab, Bb, Cbb/B, Db, Eb, F, G) in my mind which would turn this section into

But when my ear pulled me towards the note D after the note B, it had become something else.

Because I had only used 4 notes, it is difficult to say exactly which scale I used here. In my mind I was playing
G Phrygian (G, Ab, Bb, C, D, Eb, F) a minor scale over a major dominant chord that added a bit of Flamenco flavor
but if I had had more space and time to add more notes, I would find Spanish Gypsy Scale (G, Ab, B, C, D, Eb, F)
which also contains those 4 notes that I played over G7 (D, Eb, G, Ab), more appropriate and use that instead for sure.
After all, it has the note B just like the G7 chord whereas G Phrygian has Bb.

It’s not to say the 3rds of a scale couldn’t be altered, though. It all depends on which notes follow which ones. If there are already too many extension notes in the melody that don’t belong to the chord, I tend to keep the 3rd note as one of the anchors that stay solid and maintain the unique sound of that particular chord. 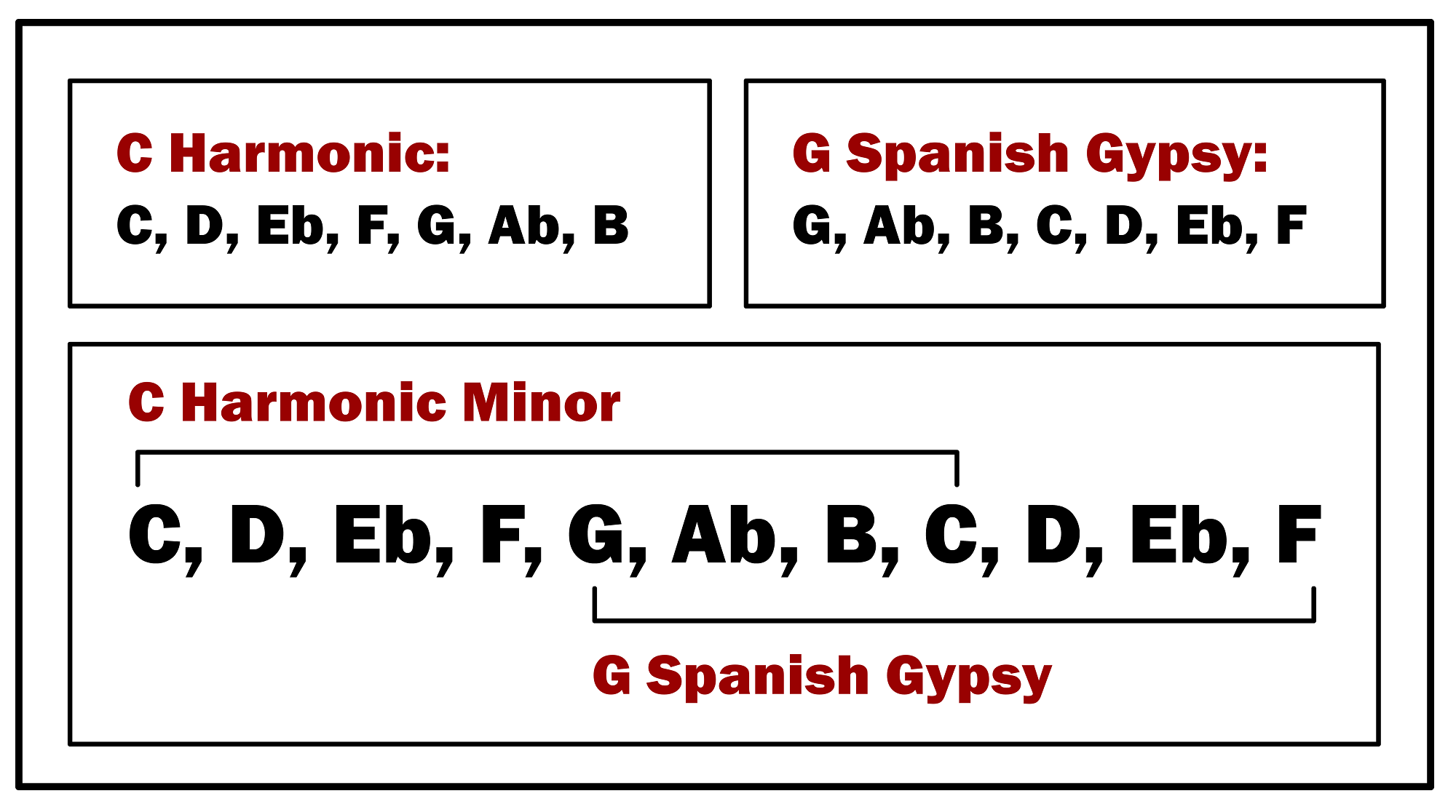 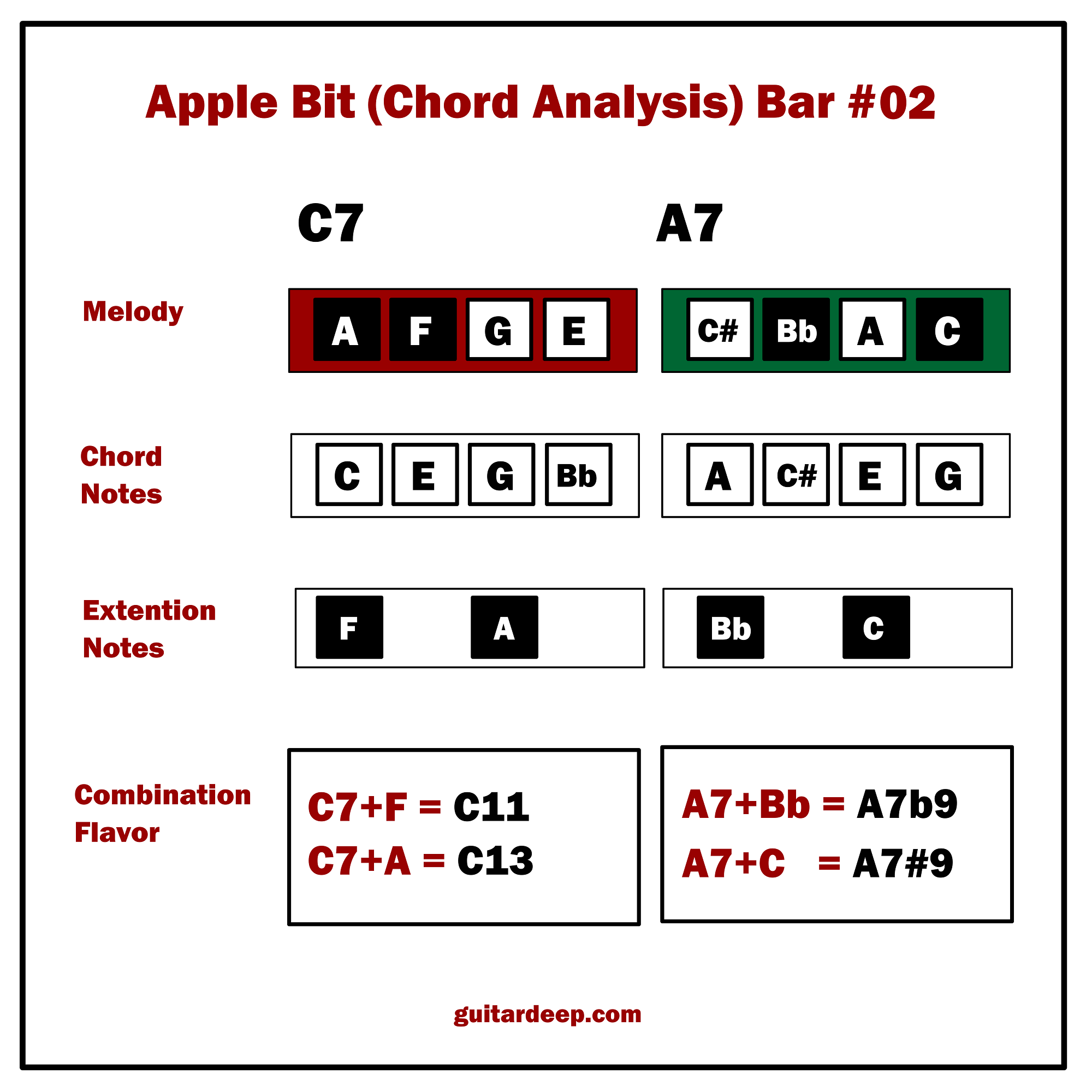 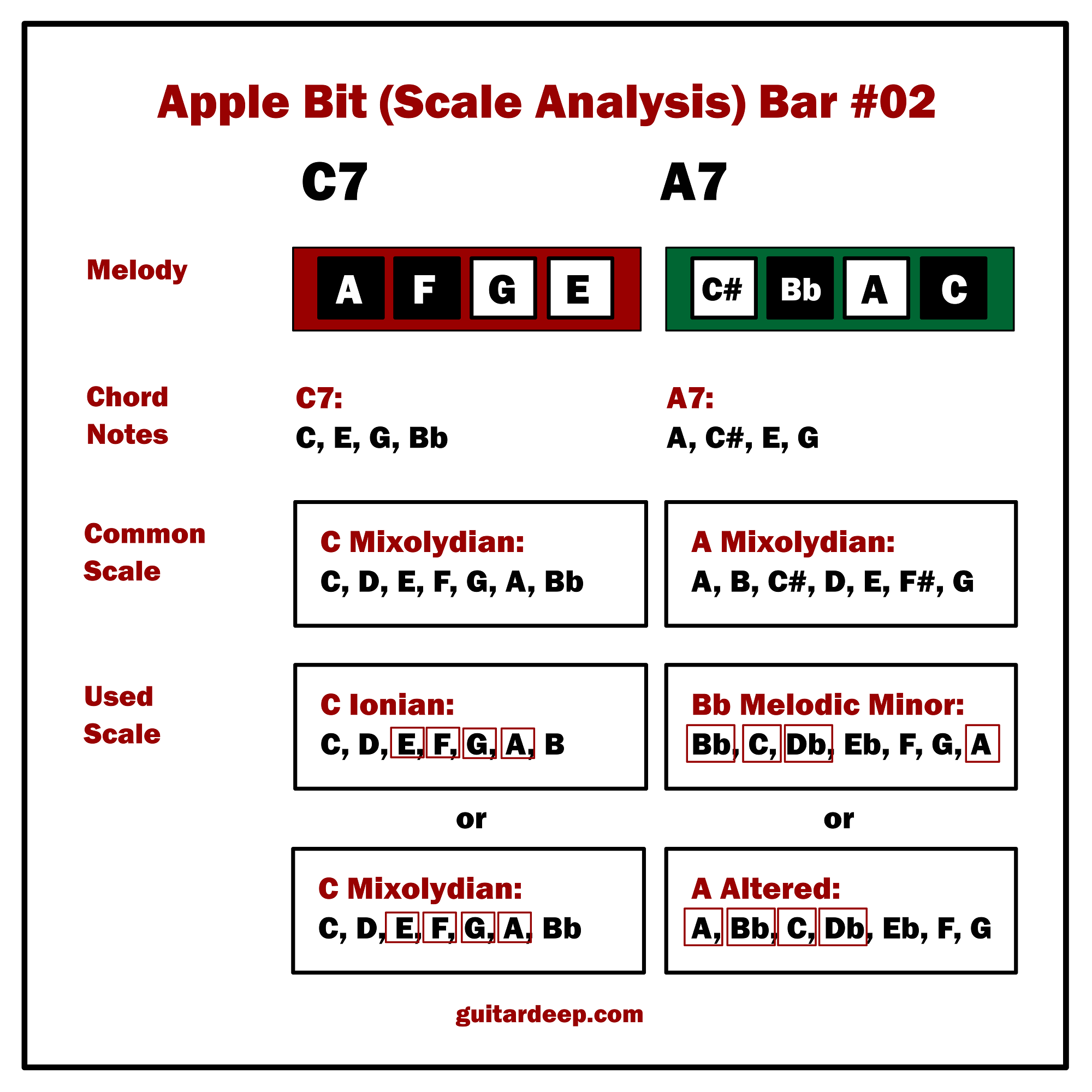 I would’ve used a plain C or maybe a C MAJ7 here and start the bar with the note G but after using the chromatic notes
G and Ab back to back at the end of the last bar,
I felt like going a bit bluesy adding the next chromatic note A.

It’s almost like slipping into D Blues Scale for a split second between the G Spanish Gypsy Scale of the last bar
and the C Ionian Scale which I seemingly use here. However, in reality, what I use is technically a

Why is that?
Because when the melody continued starting with 2 extension notes (A and F) right in the beginning of the bar,
using C7 instead of C made it more fitting and bluesy somehow. Maybe I could’ve even used a C MAJ 7 chord instead but it probably would’ve made it a notch too mellow for what I wanted there.

It’s all about small choices like that and testing them out if you have the time to do it. While you’re improvising, it’s a different story, though. You have to act quicker and use the best idea that happens to show up at that very split second. It doesn’t always
happen to be the best choice but that’s what it is and what makes it more exciting. That’s why building chops and getting as good as we can, is very important if we’re planning to follow more of an improvisational path in the future.

On the chord A7, the blues and flamenco interaction continues, because C Major key calls for Am7 not an A7.
It shakes things up a bit.

starting from its 7th degree which is the root note of the A7 chord: A.

This is a trick I use often if a dominant 7 chord is playing the role of V7 chord; if it is followed by its fourth.

In this case the A7 is indeed followed by its 4th which is D in the form of Dm7.

If a dominant 7 chord is V7 and resolves into I chord, I use the 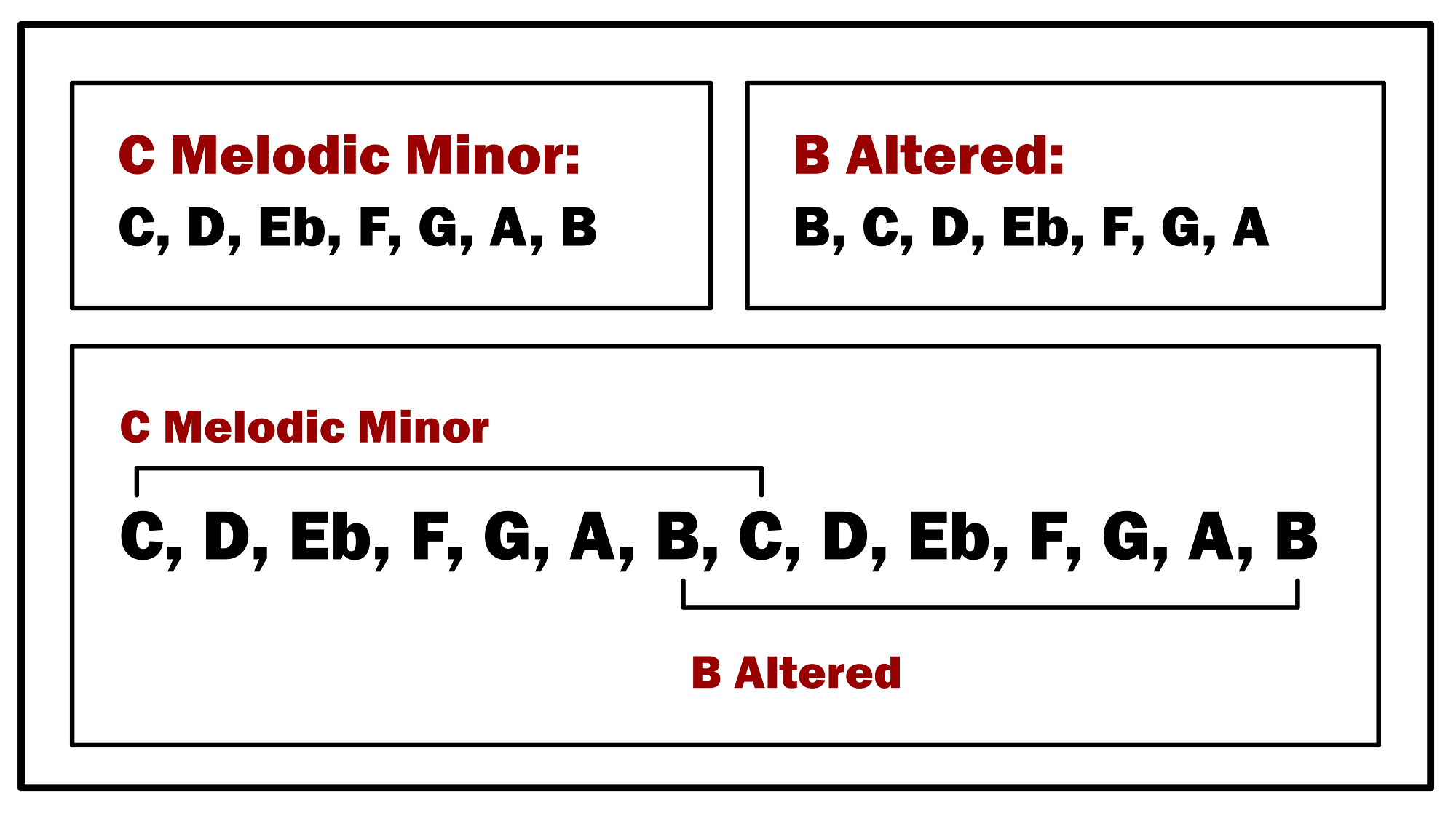 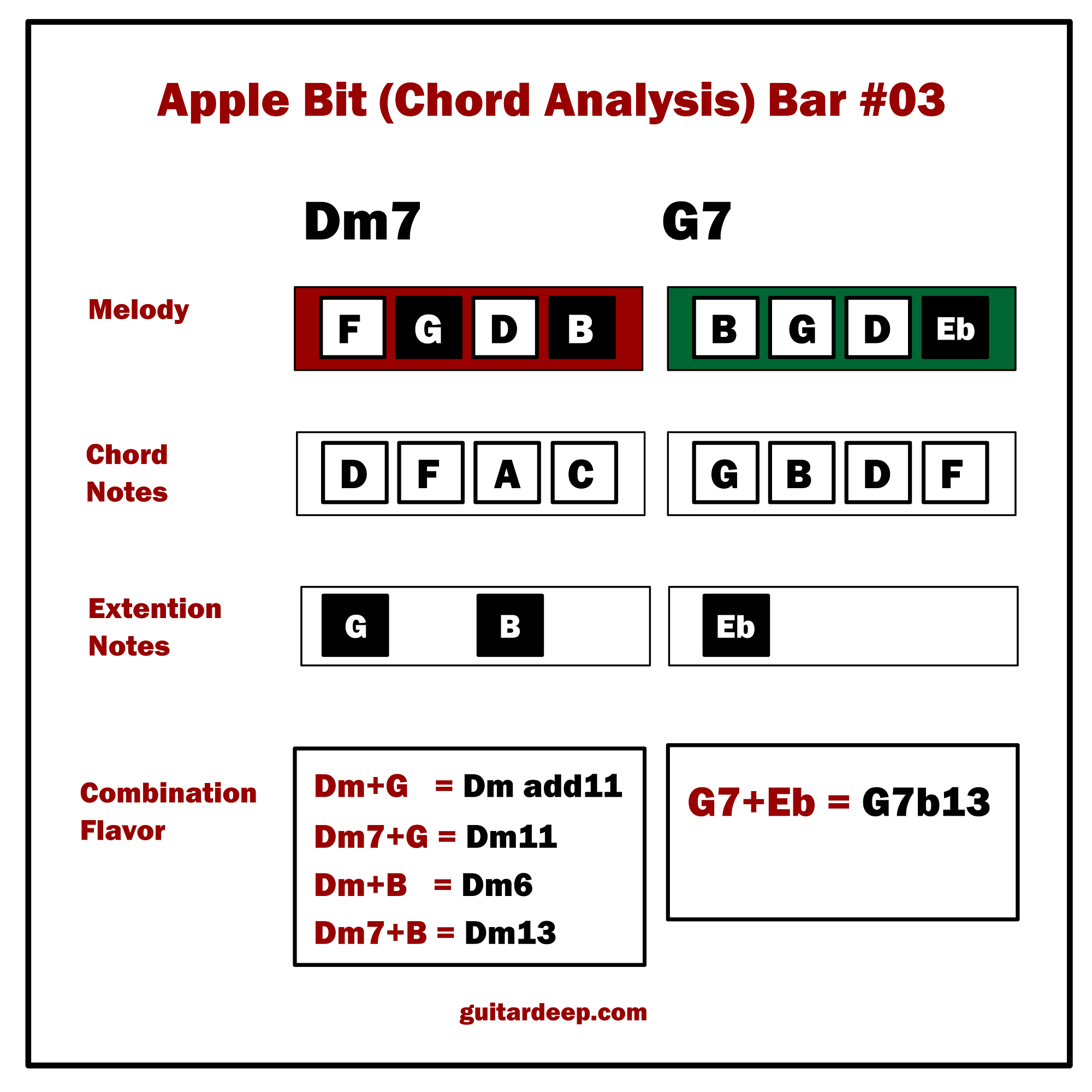 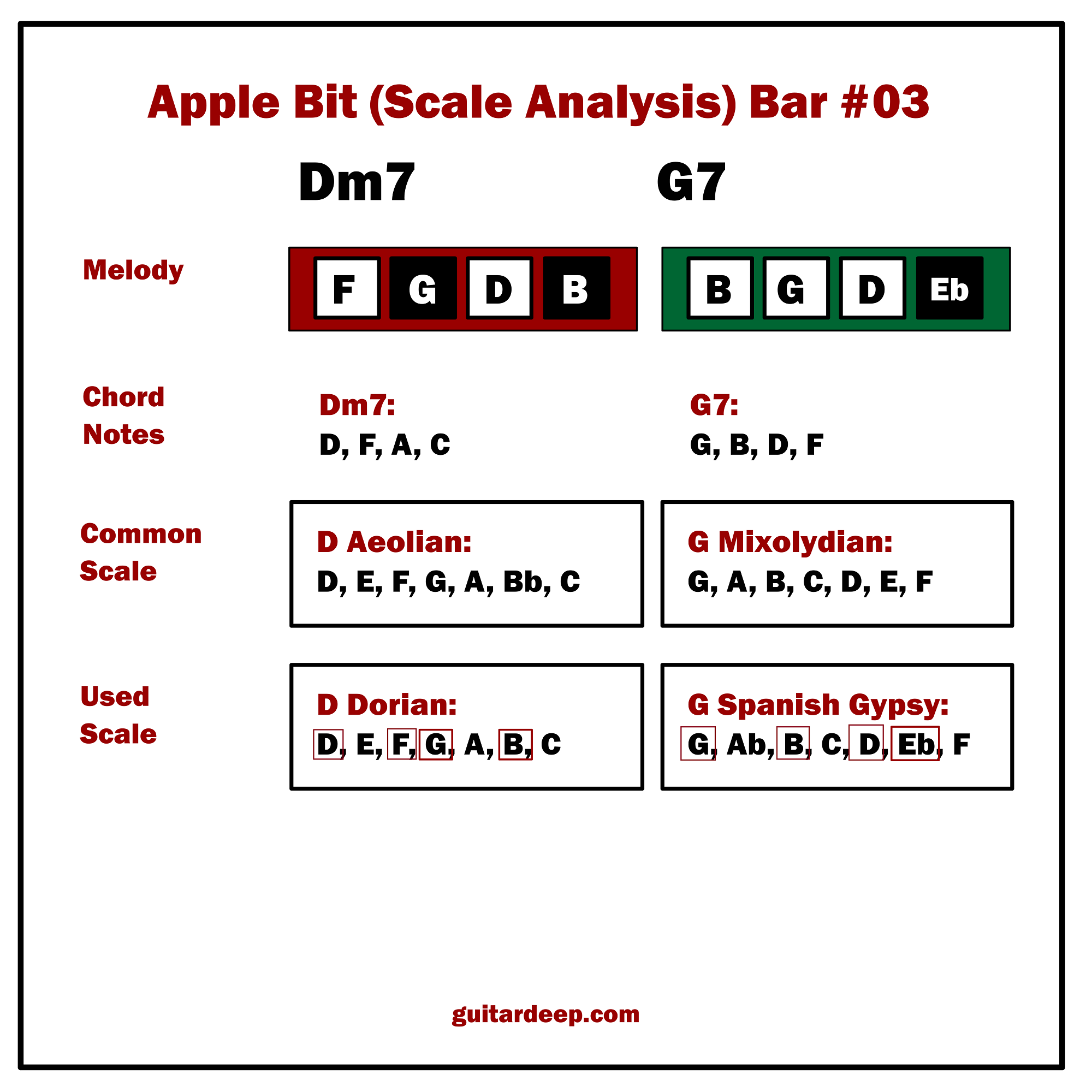 Nothing very special is going on here.

For the G7 chord I used the G Spanish Gypsy Scale (G, Ab, B, C, D, Eb, F) again. This time it was intentional though.

I was going to play a simple G Mixolydian ( G, A, B, C, D, E, F) at first but for some reason my ear wanted to place that Eb before the whole thing resolved into C in the next bar which incidently turned it into something else. 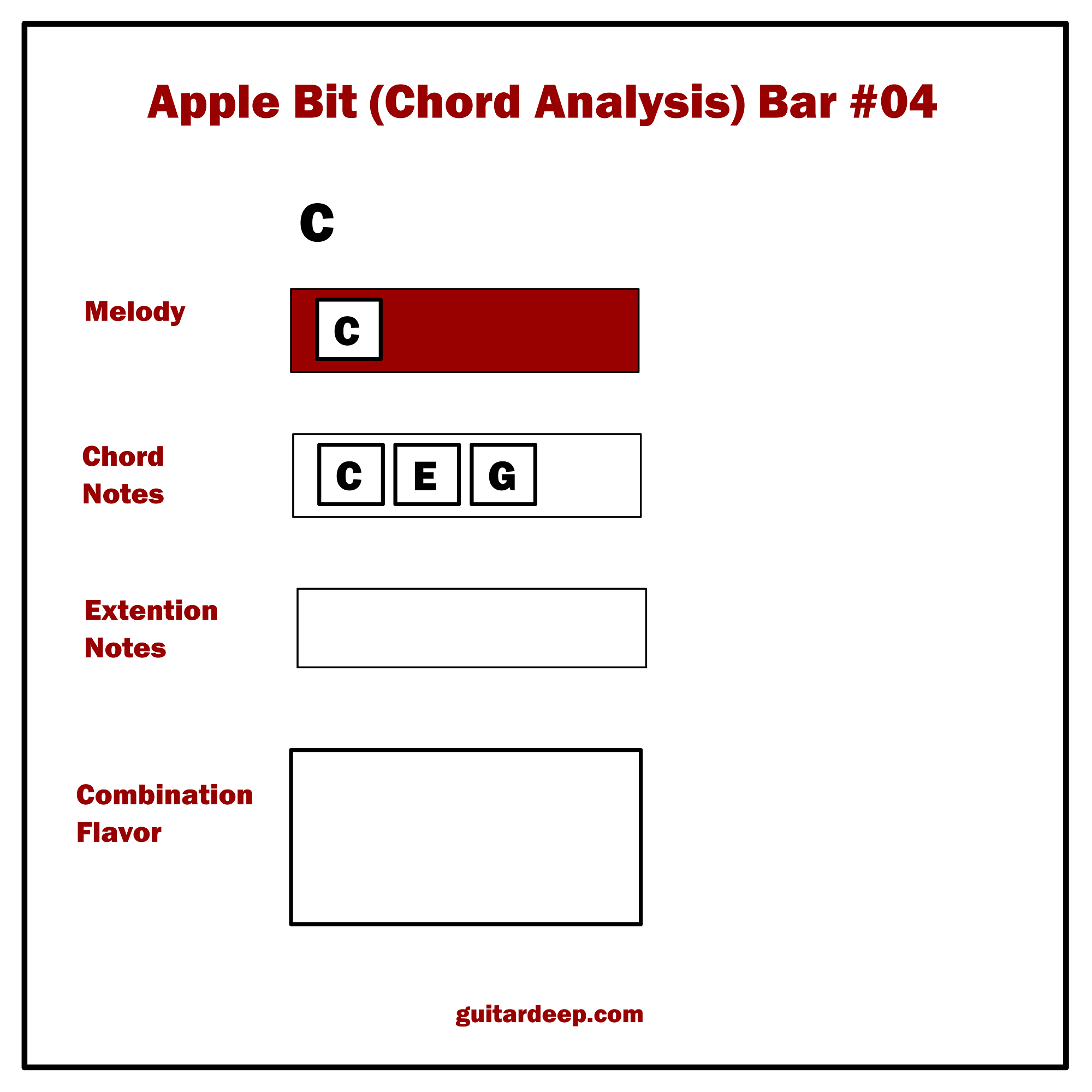 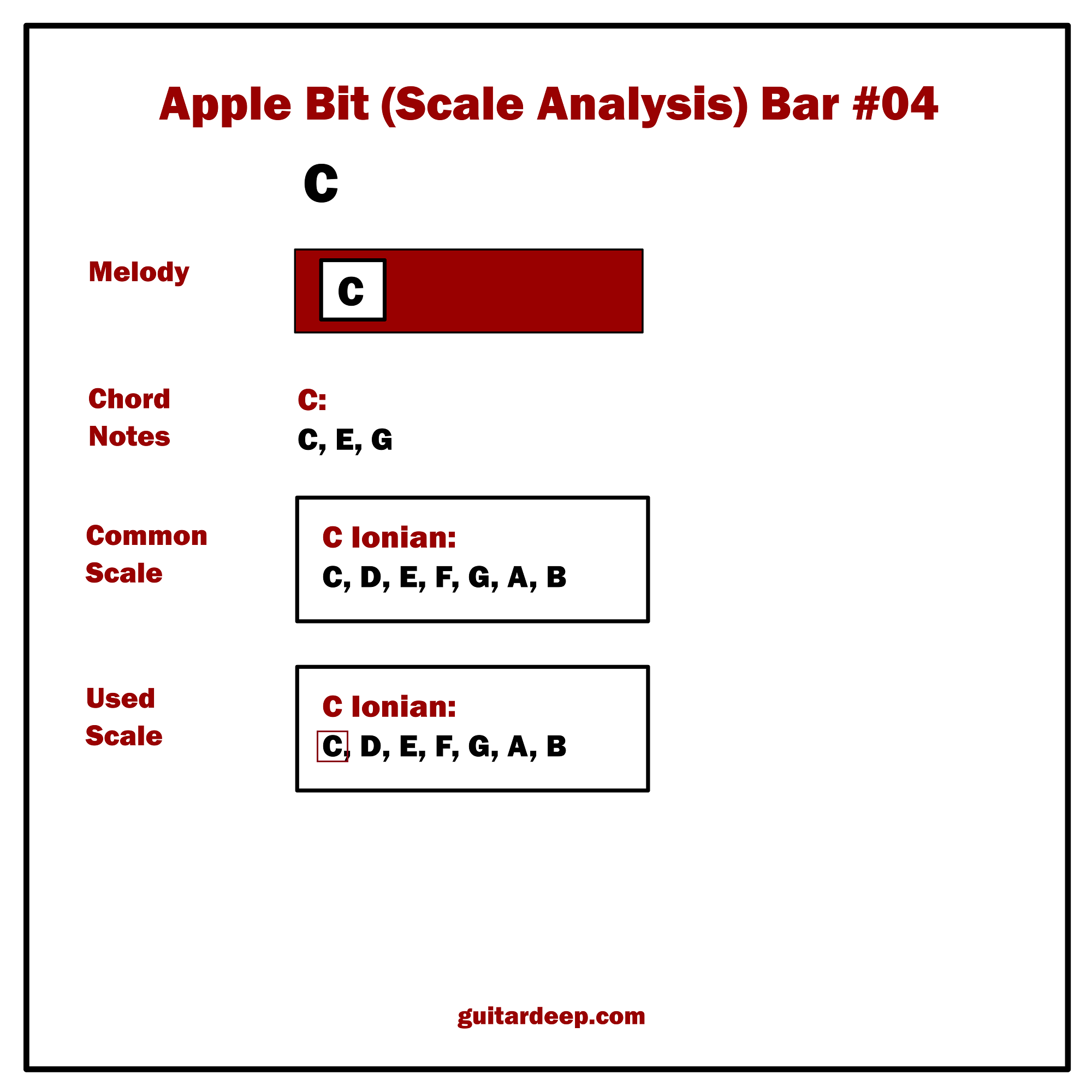 Simply ending the piece with the root note of the final C chord.

It almost sounds like a Minor Scale ending with a major chord giving that Flamenco, Gypsy Jazzish feeling.