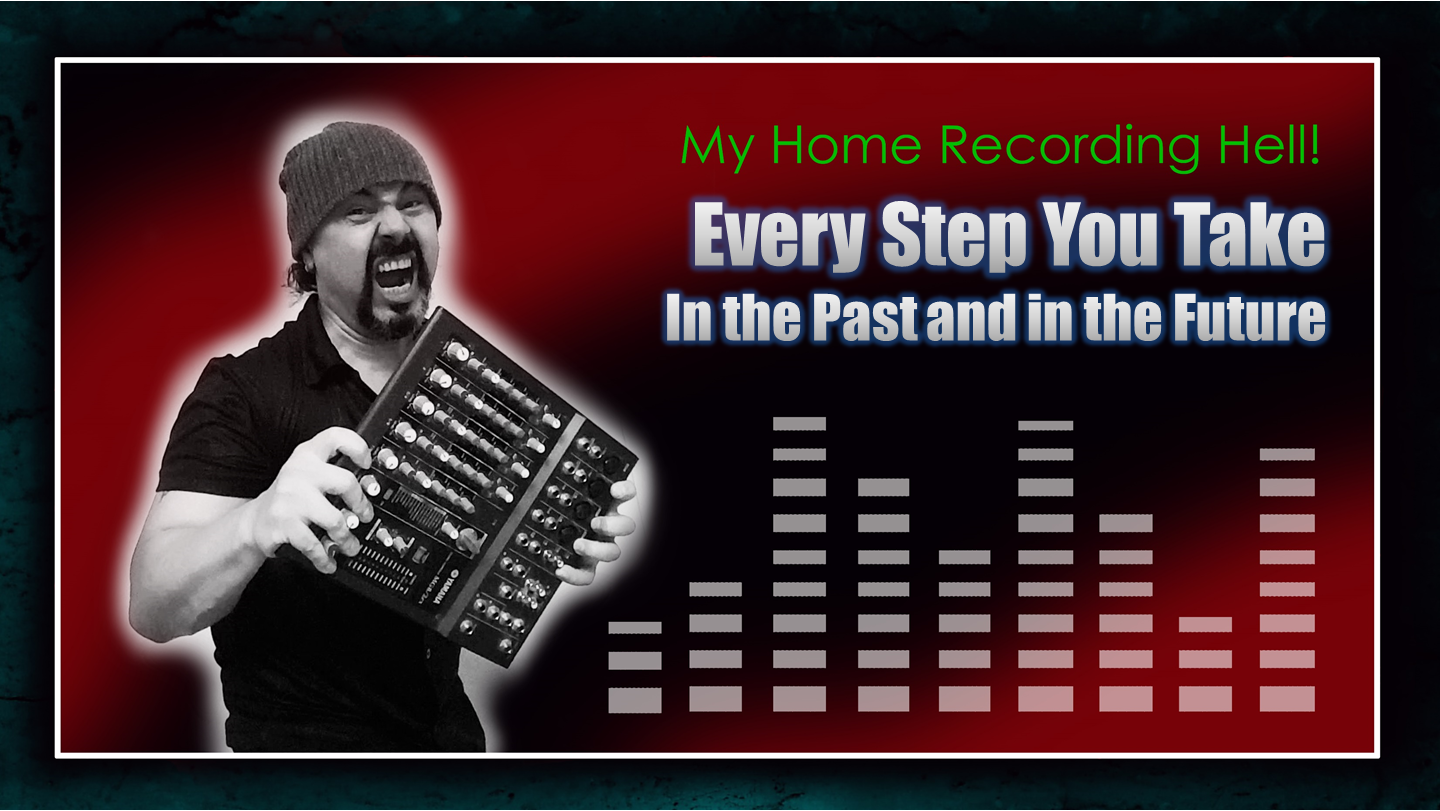 Let’s face it, I don’t have the most capable computer in the world and I don’t have the budget for heavy duty equipment. This forces me to concentrate on getting the most out of whatever I happen to have at hand. One of the difficulties of working with an old computer and a weak hard disc is facing the frequent crashes and latency issues. The computer itself hasn’t crashed per se but the programs I use, like additional plug ins and the DAW can’t seem to handle over certain number of tracks together. They either slow down and make it impossible for me to listen to the combination of my tracks or abruptly shut down, which incidentally only seems to happen at times when I have forgotten to save my current work, hurray!!!

There are ways to go around that.

For example, I record and prepare the parts of a given song separately in different DAW files and then I try combining, preferably, the wav audio tracks of those separate parts in a single DAW file. This is not a very smooth way and comes with a lot of complications in itself but it is, however, much less demanding on my computer.

Recently, I was working on a guitar solo and the backing of it for a song. As I mentioned above, I used a completely different DAW file for the whole solo section.

First, I had the whole thing planned on paper:
The rough solo idea, the counterpoint for it, the harmony and the distribution of it to several tracks, etc.

Then I performed all the parts and programmed the additional percussion and whatnot. The whole thing sounded quite good by itself.

But when I inserted them as individual tracks into the main DAW file, the solo part didn’t quite blend with the rest right away. I did some adjustments, like changing the drum patterns and easing down on the delays for the guitar, etc. and the result was pleasing enough. So, I moved on to the other parts.

After some time, as I was listening to many alternate takes of my song, I realized how much I like the sound and the feel of the original DAW track for the solo. Maybe it wasn’t such a great idea to change it so much to make it sit well with the rest of the tracks such as the following chorus part that came right after the solo. Maybe I should have altered the other tracks a bit to fit the solo part and it should have been a two-way compromise.

But now, I had come such a long way and put down so many different changes and extra bits all over the place many of which worked perfectly. I didn’t want to mess them up trying to conjure the ancient soul of an old part. It was going to be a challenge to go back and figure out the way everything was, what was to be changed, replaced and what was to remain the same. In a scenario like this, the hardest part is to remember what you were doing back then. The thoughts are not fresh any more and if you’re like me, a musician who comes up with 100 ideas a second, goes through endless combinations of trials and errors, who ends up having to choose one out of several very interesting possibilities for every tiny part, extreme frustration or the total break down of your brain functions are not unlikely possibilities.

Luckily, not only do I use a duplicate of the main DAW file to work on each time I turn on my computer but I try to keep a log of what I’m doing at each step in a notebook or on a paper. I number all “the dailies”, meaning the mp3 or wav test files that I listen to in between, to check the results on different sound devices. So, when I’m stuck somewhere and I feel like the previous version of something was better, yet an undo button couldn’t take me back there, since it was 700 takes ago, not to mention in a completely different DAW file, I simply check out my notes or the number on the mp3 file, open the DAW file with that exact number, then either I transferee those track files (MIDI or AUDIO) into the recent DAW file; or if the issue is only about the track settings, the effects plug-ins, I just manually change the settings on the recent file by copying the previous ones.

So far, I talked about writing down what you have done at a session that you have finished to review it in the future. But that’s not all I would recommend you to write down. When you’re doing these make over works, it is also a good idea to write down what you’re GOING to do; I mean each step, however simple it may seem. Because it takes a load of your mind that frees it to do creative work, rather then leg work and unnecessarily get burdened by it.

Even though you may know all the steps of what you’re supposed to do next, the little surprises along the way during a simple process may make you go off the rails and lose your way or they may bring on the stress of having to constantly remember where you are at any given moment and where you have to get back to.

Anyone who has spent some time recording and mixing wouldn’t be a stranger to the “rabbit hole” phenomenon. For example, you sit down to fix some guitar track settings, then before you’re quite done with the guitars, you realize that the the bass is a bit off. You try to fix it but halfway, you mess up the drum part so you leave the bass tracks aside for a while and you start working on drums. While at it, you come up with good fill ideas, you leave your half finished drum patterns and you start adding fills to them; they’re good but the tone of the toms may require some EQing; you start working on those now, eventually, they end up sounding great but now the rest of the drum dynamics are weak compared to those with the tom fills. You decide to redo the whole drum track. As a result, the drum and the guitars are ok together but in addition to the earlier half-finished bass parts, the motif on the fill in bars need adjusting, etc.

Eventually, you get very tired and burnt out. Your mind freezes and it doesn’t let in any more information. It starts giving “System Overload!” warnings.

You ask yourself,
“Where am I? What the hell was I doing?”
Crazy!!!

Where as, in the beginning, all you had to do was shape the rough edges of your guitar track. Instead, now you have a complete mess in your hand and you’re way tired to even go on.

A simple list of steps on a piece of paper or on any device with a word editor can keep your feet firmly on the ground. Even if you get distracted with ideas that may give you fantastic results, you can always find your way back home. If you’re a young musician/mixer you may get away with more adventurous ways but after a certain age, it begins to become harder to focus on things and forcing your mind to constantly remember what was next seriously break your flow; it’s unfortunate but it’s a fact of life.

To cut this loooong story short, I would simply advice you write down your past and future steps and refer to them when needed. If you don’t happen to need them, that’s fine, but at least you will have the comfort of knowing that you have saved yourself from the possibility of a lot of headache.